You are here: Home › Wilhelminastraat 16 in Arnhem 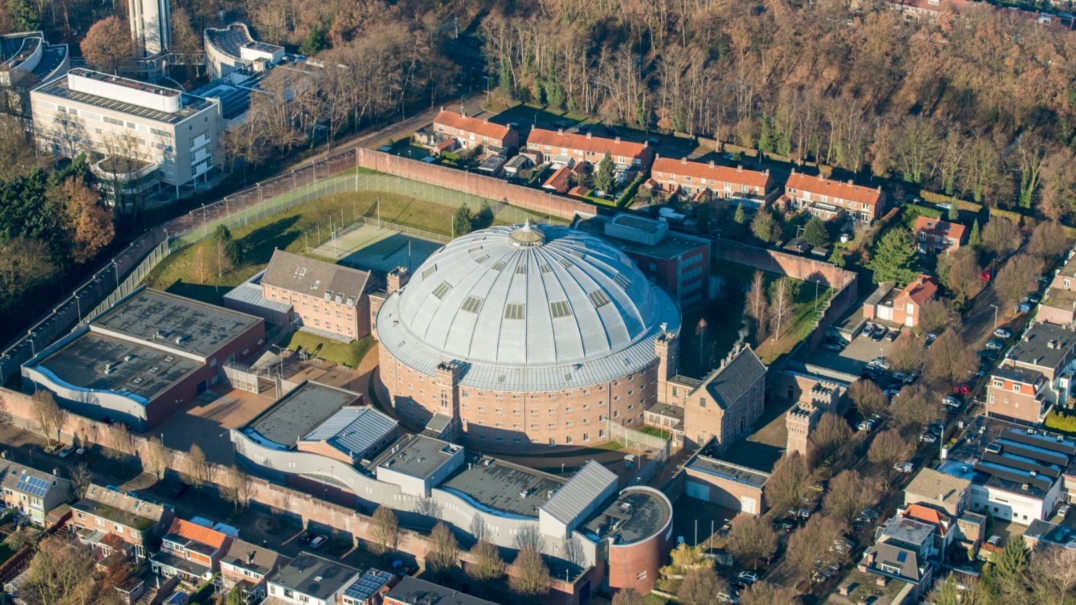 The ‘De Berg’ panopticon, or domed prison, in Arnhem is one of three of its kind in the Netherlands: the other two are located in Breda and Haarlem. It is situated in the residential neighbourhood of Lombok between the railway line and the River Rhine and is clearly visible and recognisable from both sides.

Location of the complex
The complex is made up of various sections. The original prison (sections A to E, sections J and G and the circular wall) was built in the period 1882-1883 according to a design by Johan Frederik Metzelaar, then the official government engineer/architect for prisons and legal buildings. The original sections of the complex have been accorded monumental status by the municipality. Sections A to E have national monument status.

Sections of the complex
The dome building was constructed in accordance with the panopticon principle (panopticon is the Ancient Greek word for ‘all-seeing’) devised by British man Jeremy Bentham. From the centre of this circular domed complex, prison officers could observe prisoners in the cells located around it. The idea was to give prisoners a sense of being under constant surveillance. The dome is 63 m in diameter and has four storeys, each with 50 cells, and an attic level. It is approximately 38 m in height.

Interior of dome building
In addition to the original domed prison and annexes, the site also features an activities building (section F, known as the ‘northern satellite’), a work building (section H) and an entrance/office building (section I), which includes the chapel (section J). Outside the wall is the former prison governor’s residence, now converted into offices.

The complex underwent large-scale renovations in the 1990s. Renovation work on the prison was completed in 2005. It is currently in an excellent state of repair. Until mid-2015, the prison was still in use by the Ministry of Justice. It was then used as temporary shelter for asylum seekers until late 2016.