You are here: Home › Grevelingendam in Bruinisse 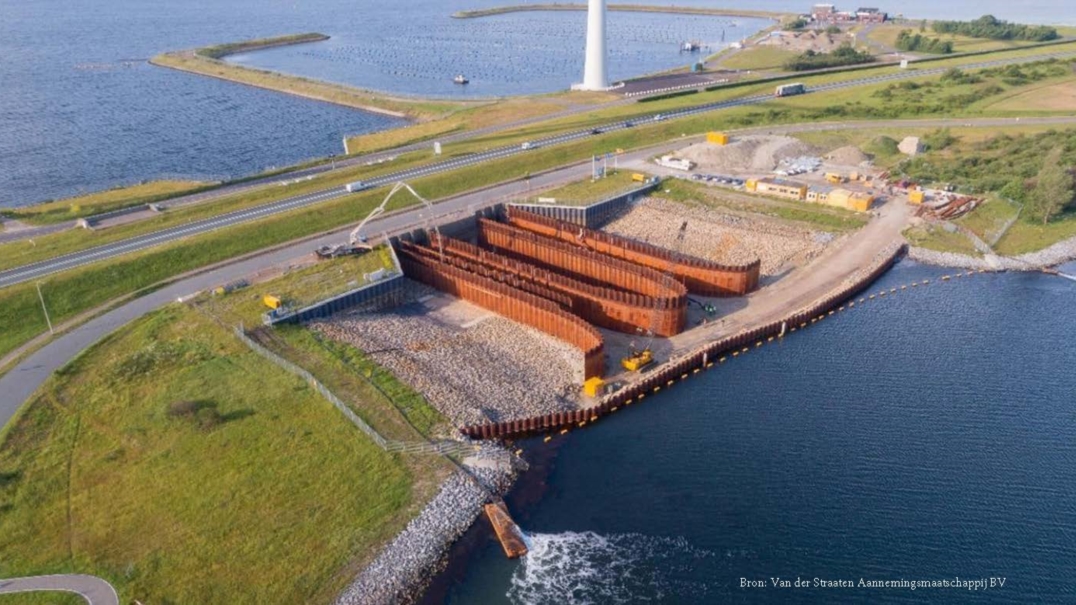 Commissioned by Rijkswaterstaat (RWS), the Central Government Real Estate Agency [Rijksvastgoedbedrijf] (RVB) is compiling a general register of interest. The aim of the register of interest is to establish whether parties would be interested in occupying the site of the currently partially completed tidal power plant on payment of a competitive fee. The party being sought is an operator who wishes to use government land for a period of 20 years to complete and operate the Tidal Technology Centre (TTC) at its own expense and risk.

In 2017, the initiative was taken by an operator to establish a tidal test centre at the Flakkeese Spuisluis in the Grevelingendam for which the operator received various subsidies and a Water Act permit from RWS. However, the operator failed to complete the project, after which RWS withdrew its permit. For this reason, Rijkswaterstaat has commissioned the Central Government Real Estate Agency to compile a general register of interest to ascertain whether other parties are interested.

Procedure
In the first instance, the purpose of this survey is to gauge the level of interest among operators in completing and operating a Tidal Technology Centre at their own expense and risk.

The result of this survey will serve as a basis for the decision-making process (scheduled to commence in mid-November 2020) on the follow-up procedure. The authorities concerned will decide on the follow-up procedure by not later than 1 January 2021. If there is insufficient interest, the authorities may decide jointly not to take any further action.
In order to be able to prepare the decision-making process properly, interested parties may be invited to attend an interview. At this interview, you will be invited to present your business plan. You will also be asked for your ideas regarding public goals that can be associated with the centre, e.g. research, education and public information. In addition, you can contribute your ideas on how the relevant authorities could make the sound operation of the centre attractive. The Central Government Real Estate Agency, Rijkswaterstaat, the Ministry of Economic Affairs, the province of Zeeland, the municipality of Schouwen-Duiveland and experts in the field of subsidies and entrepreneurship will be present at this interview. These interviews will be held between 19 and 29 October 2020.

If it is decided to proceed with the development of the Tidal Technology Centre, the Central Government Real Estate Agency will, when commissioned by Rijkswaterstaat, make preparations and then conduct an open procedure to establish a right of superficies and a tenancy right for the use of government land for the purpose of completing, building and operating a Tidal Technology Centre at its own expense and risk. A “biedboek” containing conditions and selection and award criteria, yet to be determined, will then be compiled for this purpose. Depending on the decision taken, an open procedure is expected to start mid 2021. This open procedure will then be announced on www.biedboek.nl.

Site
The site is connected to the Flakkeese Spuisluis in the Grevelingendam, forming part of the plot of land recorded in the land register as Bruinisse municipality, section G, number 1673, part.

The Flakkeese Spuisluis is a drainage sluice located in the Grevelingendam, which was renovated by Rijkswaterstaat in 2017. The land on the Grevelingen side has been prepared for the construction of a test centre as envisaged in the original plans. The following work was carried out by Rijkswaterstaat:
- Renovation of sluice facilities;
- Scour protection;
- Rock installation.

Current situation
The current situation with the unbuilt Tidal Technology Centre is as described by Rijkswaterstaat in the appendix "Inventory of permits for the completion of TTC as part of the general market survey". Among other things, it lists the civil works which have already been carried out and the civil works that have yet to be carried out in order to complete and operate the Tidal Technology Centre. A technical assessment by Rijkswaterstaat of what has been built is also attached.

The original plan
A test centre for tidal energy was planned by the original initiator for the approx. 10,000 m2 site. This test centre was to consist of three test channels into which turbines could be lowered from the platform by means of a mobile crane. The test centre would be equipped with user-specific measuring and monitoring systems. The plan was to build the test centre at the outlet of the Flakkeese Spuisluis. The structure would connect directly to this outlet and would consist of three concrete channels. The channels that have now been completed have a depth of 5.7 metres deep. The small channel is 3.2 metres wide, the medium-size one 6.8 metres wide and the large one 10.4 metres wide. Water will flow through these channels at low tide and at high tide. These channels are capable of simulating 95% of the conditions in the world.

After completing the test centre, the former operator intended to rent out the test channels on a commercial basis to companies/institutions that would test their turbines in it. The turbines could easily be lowered into the test channels using a mobile crane. This mobile crane could be located on the platform. This test centre is unique in the world. For example, one special aspect of this test centre is that the flow in the channels can be stopped. If the channels are not rented out, they can be used for power generation.

Spatial planning requirements
To complete the tidal energy centre in the Flakkeese Spuisluis, various permits are required and various reports must be made to Rijkswaterstaat and other competent authorities. A list of these reports and permits can be found in the appendix "Inventory of permits for the completion of TTC as part of the general market survey". In addition to the necessary decisions, work still needs to be carried out on completing the power generation centre. A summary of the possible work still to be carried out is also attached.

Specific conditions imposed by Rijkswaterstaat
The initiator must submit a new application for a Water Act permit for construction, operation and power generation by means of turbines. The initiator may choose to submit two applications. One for the completion of all the civil engineering work to allow drainage (Application A) and one for putting the plant into operation with turbines for power generation (Application B). The initiator should take into account that a financial security of €750,000 is required to cover the provisional repair costs arising from the completion of the works, the use of the site and its removal following withdrawal or termination of the permit. On completion of the works included in Application A, the financial security of €750,000 will be reduced to €375,000.
In the appendix, you will find a list of all the documents that need to be sent to RWS in order to submit a complete and admissible application. It also lists important issues concerning permit applications. Finally, an operating period of 20 years is envisaged for the energy centre.

Conditions of the Central Government Real Estate Agency
The RVB will not initiate an open procedure until the authorities have taken a decision to proceed with the development of the Tidal Technology Centre. The RVB will enter into a lease with the operator to whom the site is awarded for the use of the land on the Grevelingendam and will establish a right of superficies for the building to be erected thereon. These leases will be entered into for the duration as specified in RWS's public law permits, i.e. 20 years.

The National Real Estate Agency acts in accordance with the “Regeling beheer onroerende zaken Rijk 2017”, which means, among other things, that land is used in an open, commercially competitive and transparent manner.